Ten Most Popular Meals of the World

The funny thing about food is – it’s all about a number of basic, recognisable ingredients that are cooked into the food that we know and love. It is but natural that the most popular meals in the world are the ones that are almost ingrained in the cultures they are made in.

This article is about ten of the most popular meals in the world.

Originating in the south-western region of Valencia in Spain, paella is essentially a rice dish with a lot of herbs, olive oil and saffron. Seafood and meat can be added to this mixture for some variety.

Each one of us has our very own favourite Italian joints for digging into some great pasta. Ranging from fusilli, lasagne, spaghetti and macaroni, pastas have been adapted by different cultures worldwide, but the most famous form certainly is from the heart of Italy.

It feels plain strange to even start describing a pizza, but here goes – a flat, baked piece of bread that has a number of toppings that make this one of the most universally loved dishes you’ll ever find.

This is a chicken dish from the Indian subcontinent that is wildly popular both over there and in the UK. It is made using skewers that are baked with boneless chicken (which has been marinated with yoghurt and herbs prior to baking). This may not be the best option around for the health conscious, but it is wildly popular nonetheless.

This popular Swedish dish is also known as Jansson’s temptation, and with good reason! It is a traditional casserole made with onions and anchovies, which are sandwiched between some potato slices. It can be stored and had at your convenience too, all day long.

Sushi is simply the most famous Japanese culinary export ever! It is basically a mix of rice, vinegar, raw fish and tangy vegetables. It is traditionally consumed as a mound or rolled up in its Westernized avatar.

Chinese food is consumed by a third of the world’s population every single day, apparently, and with good reason. The Chinese specialise in making relatively simple and economical dishes which taste very unique as well. Chow mein is the Chinese name for stir fried noodles. Onions and meat are also added in more contemporary variants of this dish.

A very common food in Israel and the Middle East, Falafel is a mixture of ground chickpeas and fava beans that is made it into a ball-like dish. It is notable in its versatility, as you can snack on it or have it as part of a larger meal.

Native to Thailand, but exceedingly popular worldwide, Thai curry is a spicy curry paste that is served with rice and coconut milk. Meat and/or vegetables can be added to suit localized tastes.

This is a Swiss dish whose popularity has endured through the ages. It requires using melted cheese that is made specifically in Switzerland. Large pots are used to add pepper, wine, etc. to the cheese. What you need to do next is dip fresh bread into this delicious hot concoction, and let your taste buds experience bliss!

You may fiercely love the meals that you’re used to, but in case you are ready to experiment, the world does have a number of delectable meals for you to enjoy!

This is a guest post on behalf of Crunchlunch.co.uk –

Whether you are looking for

Cleaning up Your Campsite 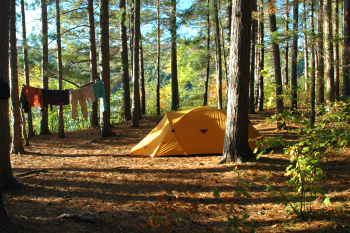 Cleaning up your camp site is one of the most important things an outdoor enthusiast can do. There is a popular idea with campers that goes, "Leave No Trace." This means that once you leave your campsite it should look like there was nobody there and be in the state that it was before you arrived. No matter where your camp zone is located, one of the primary areas of cleanup for any site will be your fire.

Making sure your fire is extinguished is highly important as fires left burning can cause serious wild fires. If your camping site is located in a national park or even a commercial site then there will most likely be cans available to dispose of your trash. However, if you are camping in the wilderness then this becomes a much bigger issue. No matter what you unpack, it should all be packed back up when it is time to go.

Junk removal is highly important when camping as any waste left over can disrupt nature.

To make cleanup even easier, it is wise not to take a lot of items of food into your camp site. There are a lot of great appliances out there that will make food preparation easy for you when out in the wild. Instead of bringing a bunch of snacks, an experienced hunter can gather his own food and then use a manual meat grinder to make a meal that can be cooked over your camp fire.

Either way, it is up to us as campers to cleanup after ourselves. Respecting nature is important to preserving it and ensuring that these campsites will be available in the future.